If you’re not watching John Oliver’s Last Week Tonight, you should be.  It’s always funny and on-point, and it has great coverage of international issues.

This week, Oliver described some of the “enhanced interrogation” techniques documented in the recently released CIA Torture Report.  He attempted to lighten the subject by enlisting Helen Mirren to read the most graphic excerpts, such as those documenting force-feeding through “rectal infusion.”

The audience’s queasiness turned to hysterical laughter, however, when Oliver reported on some of the alleged “terror plots” CIA torture had “uncovered” using these gruesome methods. First there was the story of a terror cell planning to enrich uranium by “placing it in a bucket” and swinging it around their heads “very fast” for 45 minutes. 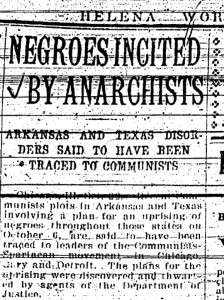 Oliver presents this accusation – and the FBI’s scramble to investigate it – as completely irrational and baseless.  Unfortunately, history tells us that while these sorts of accusations may be baseless, they also fit perfectly into the FBI’s pre-existing narratives about black communities, narratives that have long influenced the agency’s severe approach to policing black lives and politics.  The FBI’s scramble to investigate did not represent irrational hysteria.  It represented a long history of methodical surveillance of black people, rationalized by the notion that they are somehow connected to international “terrorists.”

The FBI was created in 1908, originally called the Bureau of Intelligence, under the direction of a young J. Edgar Hoover.  Many people associate Hoover with the COINTELPRO surveillance of civil rights and black power activists in the 1950s and 60s, but in fact his perception of black political activism as a threat to national security was formed much earlier, during the First World War.  The FBI expended significant resources in its early years searching for potential conspiracies between black Americans and international groups of socialists, anarchists, and bolshevists.  They also promulgated this association among local and state law enforcement agents. By the end of WWI there was a vast national network of police and civilians engaged in surveillance of black communities, sometimes working under the auspices of groups like the American Protective League, the Home Defense Council, and eventually the American Legion.  In one case, the Elaine Race Riot of 1919, nationalist paranoia regarding alleged black-bolshevist conspiracy culminated in the massacre of at least 200 black people in Phillips County, Arkansas, after a newly formed sharecroppers’ union was falsely accused of plotting to murder wealthy whites and redistribute their land. In fact, the sharecroppers had obtained a white lawyer to pursue anti-peonage claims in a court of law; but the legality of their union did not matter in the face of the expanded scope of wartime policing, and racialized assumptions connecting black politicization with “terrorism.”

Indeed, the FBI’s rush to investigate alleged terror activity amongst “African American Muslims in Montana” has disturbing parallels in both mainstream and explicit white supremacist discourses.  President Obama has been accused of being a “Muslim terrorist” so often, he incorporates clever jokes about it into his public speeches.  But while many of us might feel inured to the “birther” mythology, the underlying assumptions are persistent and insidious in many other arenas.

For example, presumed connections between Islamic terrorists and black Americans have informed an undercurrent of reaction to recent civil unrest and protests against police brutality.

When riots erupted in Ferguson, conservative and white supremacist bloggers claimed that ISIS was “exploiting” the riots to promote black resistance as part of their larger goal of destabilizing U.S. society and politics. 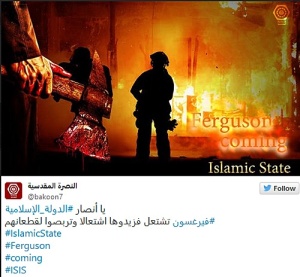 Screen shots were shared and forwarded, purporting to show ISIS members “tweeting” in support of Ferguson – an association that was then used to summarily dismiss black protesters without engaging the well-documented police violence from which the riots actually emerged.

The same theme emerged later in Baltimore, when widespread unrest provoked city prosecutor Marilyn Mosby to indict six police officers for homicide in connection with the death of Freddie Gray.  Rightwingnews published an article that accused Baltimore’s “riot-loving mayor” of working with “an Islamist group linked to terrorism,” because her administration cooperated with an Islamic charity that helped Muslim immigrants and refugees get settled in Baltimore.  Once again, legitimate and long-standing black political demands were dismissed, and the conversation redirected instead toward spurious and vague accusations tying black political figures to “terrorism.”

The injustice of policing black communities in this way, rationalized by baseless but officially sanctioned “terrorist” conspiracy theories, is all the more striking in light of the recent events in Charleston, which featured a white supremacist shooting black congregants at the city’s historic Emanuel AME church, on the anniversary of Denmark Vesey’s slave rebellion.  There has been no rush to “uncover” the terrorist network that made this attack possible, or to suppress that network with every means of state power available.   There is no vast national network of domestic spies that could have reported this attack during the six months it was being planned.  Indeed, a number of white conservative leaders have been reluctant to even admit the shooter was motivated by racism, let alone that he represents a larger right-wing threat of terrorism (a threat which, by the way, is far greater than any posed by alleged Islamic extremists).

It’s time to call these law enforcement strategies out for what they are: institutionalized racism, carrying on under the guise of “national security” and “credible intelligence.”  And although I did laugh at Oliver’s segment, I think it’s also time to take these stories more seriously.  The types of reforms currently on the table – body cams, ‘community policing,’ increased oversight – do little to address the root causes of state sanctioned violence against communities of color.  There is a whole history of assumptions tying racial political consciousness to criminality and terror which must be upended; assumptions that go to the foundation of how we even define “criminal” and “terrorist” in the first place.

John Oliver may have thought he stumbled on something so ludicrous, his writers couldn’t have plotted it any better themselves.  African American Muslims!  In MONTANA!  Ha!  But underneath the laughter is a scary truth: the FBI was poised to investigate this claim in Montana because they are already – still – engaging in surveillance of black communities nation-wide, based on alleged black-terrorist connections that have been a centerpiece of national statecraft for at least a century.  Who are they protecting, and what are they protecting against?  More importantly, who are they NOT protecting, and who are they terrorizing in the name of protecting others?  When the laughter has passed, these are grave questions that demand answers and action.