Ed and Will Smith

Killed January 2nd, 1915. Ed and Will Smith, brothers, were removed from the county jail and killed near Elmore, AL.  Wetumpka County’s Sheriff Jackson initially claimed to have been bound to a chair and physically restrained, while a group of fifteen to twenty masked men forced the jail trustee to unlock the two prisoners’ cells.[1]  This version of the story was reported in a number of newspapers on January 4th, the morning after the lynching occurred.[2] Alabama Governor Emmet O’Neal, however, was a critic of lynch law, and ordered an investigation into the incident.  Five days later, after the investigation had been concluded, the Savannah Tribune reported a somewhat different set of details than those that were given initially.  Now the sheriff described the mob as being comprised of only five masked men, though he still insisted they were armed, and that they overpowered him and bound him to a chair.  There was no mention, however, of a jail trustee unlocking the jail for the members of the mob.  Instead, the sheriff’s wife was reported to have told investigators that “she bolted the jail door before retiring, but that later the sheriff unbolted it and went out.” The investigation failed to determine, however, whether or not the sheriff ever re-bolted the door prior to the arrival of the lynch mob.[3]

[1] “An Alabama Lynching,” The Emporia Gazette, Emporia, Kan.; Jan. 4, 1915.  In some news articles, the sheriff is listed as Johnson instead of Jackson. 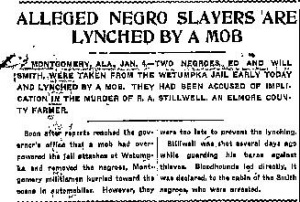 PDF: Ed and Will Smith

PDF: Ed and Will Smith 2