This case is unusual, in that two different groups of state actors were responsible for attempting to carry out a lynching, and also for rescuing the intended target (members of the Virginia militia, versus members of the National Guard, respectively).  Addison was already under arrest and in jail when the attempted lynching occurred. 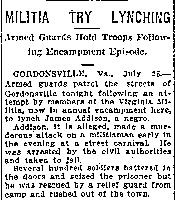