Reliance on Police Cannot Be Consistent With What We Want to Happen in Public Schools (interview with Kimberle Crenshaw), Real Independent News and Film, November 5th, 2015 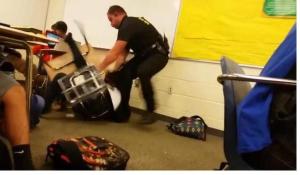 An Open Letter to Every Teacher Who Has a Told a Student to Put Away Their Cell Phone, Huffington Post, November 3rd, 2015

Guilty of Being a Black Girl: The Mundane Terror of Police Violence in Schools, The Hampton Institute, October 29th, 2015

No, the Victim of #AssaultAtSpringValley is Not an Orphan, Colorlines, October 29th, 2015

Ben Fields is One Problem, and the Silent Black Male Administrator May Be Another, The Feminist Wire, October 28th, 2015

A South Carolina Cop Brutally Manhandles Young Black Girl and Nobody Flinches; We Have a Problem, Daily Kos, October 26th, 2015

What You Need to Know About #AssaultAtSpringValleyHigh, Advancement Project, undated October, 2015 (archived)