The War on Crime 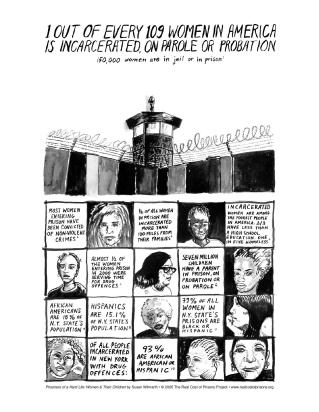 Prisoners of a Hard Life by Susan Wilmarth, The Real Cost of Prisons Project

Being Arrested is Nearly Twice as Deadly for African Americans as for Whites, Five Thirty Eight, July 23rd, 2015

It Takes a Lot of Stop and Frisks to Find One Gun, Leah Libresco in FiveThirtyEight, June 3rd 2015

I’m a Black ex-cop and this is the truth about racist policing, Black Agenda Report, June 2nd, 2015

People Who Should Be Released from Jail are Dying There Instead, Fusion, July 29th, 2015 (archived)

When Bail is Out of Defendants’ Reach by Shaila Dewan for the New York Times, June 10th, 2015.

Pay to play: How Michigan makes it hard to fight for property seized by the police, MLIVE, November 12th, 2015

How New Mexico is stopping cops from seizing money without a conviction, Al-Jazeera America, July 28th, 2015

The cost of ‘quality of life’ policing: thousands of young black men coerced to plead guilty to crimes they didn’t commit, The Washington Post, November 11th, 2015

These cops are tired of white people getting freaked out by their black neighbors, Washington Post, May 6th, 2015

Poverty is Not a Crime (organization)

Pay up or go to jail: how a Mississippi town resurrected the debtors’ prison, The Guardian, October 21st, 2015

Welcome to the Courtroom That is Every Renter’s Nightmare, Next City, September 14th, 2015

The Poor Get Prison, Institute for Policy Studies, March 18th, 2015

The Town That Turned Poverty Into a Prison Sentence, The Nation, March 14th, 2014

When a Prison Closes What Happens to the Prison Town? Christian Science Monitor, January 1st, 2016

Meet Jay Via: One bad cop, in one county, who did a whole lot of damage, Washington Post, December 11th, 2015

Photographer Wants to Open Your Eyes to the Brutal Realities of the Prison-Industrial Complex, Huffington Post, September 3rd, 2015

The Collateral Victims of Criminal Justice, The New York Times, May 4th, 2015

The Thin Blue Line is a Burning Fuse: Why Every Struggle is Now a Struggle Against the Police, The Hampton Institute, August 19th, 2015

Could Black People in the U.S. Qualify as Refugees? Washington Post, August 14th, 2015

The Videos that are Putting Race and Policing into Sharp Relief, New York Times, July 30th, 2015

The System Isn’t Broken, It Was Designed That Way: A Critical Analysis of Historical Racial Disadvantage in the Criminal Justice System, The Hampton Institute, July 25th, 2015 (archived)

Understanding the Human Cost of Imprisonment, Lacino Hamilton for Truth Out, June 23rd, 2015

How to Build Trust in Policing: Measure what Matters, The Marshall Project, October 23rd, 2015

Prison Education Reduces Recidivism by Over 40% – Why Aren’t We Funding More of It?  The Nation, August 17th, 2015

Cameras on cops still in demand a year after Ferguson, CNN-Money, August 7th, 2015

Too Many People in Jail?  Abolish Bail by Maya Schenwar op-ed in New York Times, May 8th, 2015

One State is Dealing with Police Brutality in a Way that Everyone Should Follow, Matt Essert for Mic, December 14th, 2014

Prison Map – photo-documentary site shows overhead images of prisons in the U.S.  the site’s creator asks, “what does the geography of incarceration in the United States look like?”

Was a prison built every 10 days to house a fast-growing population of nonviolent inmates? Tampa Bay Times Polit-Fact.com, July 31st, 2015 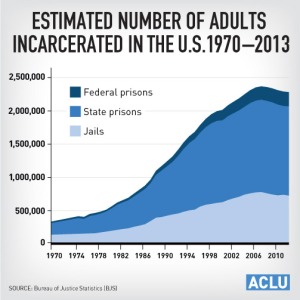 40 Reasons Our Jails and Prisons are Full of Black and Poor People, Bill Quigley for Black Agenda Report, June 2nd, 2015

Sixteen States Have More People in Prison Cells than in College Dorms, The Grio, March 30th, 2015

This is How Black Girls End up in the School to Prison Pipeline, Dani McClain for The Nation, February 5th, 2015

Stop Fearing our Children: Why Juvenile Incarceration Has Got to Go by Maya Schenwar, in TruthOut, August 14th, 2014

The Most Militarized Universities in America, Vice News, November 6th, 2015

In Iraq I raided insurgents. In Virginia, the police raided me. Washington Post, July 24th, 2015

Tanks for Nothing: Why Obama’s Plan to Demilitarize Police May be Dead in the Water, Newsweek, June 9th, 2015

Obama to Limit Police Acquisition of Some Military-Style Equipment, NPR, May 18th, 2015

Obama sets new limits on police use of military equipment, Reuters, May 18th, 2015

Counterpoint: Militarization is Not What Ails Ferguson, Go Up State, August 24th, 2014

A Prison Sentence Should Stop After Prison, The Daily Beacon (Utah), November 11th, 2015

The County: the story of America’s deadliest police, The Guardian, December 1st, 2015

Bolts from the blue, The Guardian, November 5th, 2015 (examines police use of tasers)

Is Police Misconduct a Secret in Your State? WNYC News, October 15th, 2015 (archived)

Police brutality: How UK cops disarmed a knife attacker and why it stirred debate over US practices, RT.com, August 1st, 2015

Police brutality is a problem for everyone, Baltimore Sun, July 30th, 2015

Gangs of the State: Police and the Hierarchy of Violence, The Hampton Institute in Truth Out, July 19th, 2015

Why Do I Feel So Vulnerable? Thoughts on Police Brutality Against Black Women, Huffington Post, July 17th, 2015

Why Don’t Settlements Over Police Brutality Come Out of Police Budgets? The American Prospect, July 15th, 2015

Poll: Confidence in Police is at a 22-year low, Except with Conservatives and Republicans, John Walker for Fusion, June 19th, 2015

Black Americans are Killed at 12 Times the Rate of People in Other Developed Countries, Nate Silver FiveThirtyEight, June 18th, 2015

All 50 U.S. States Fail to Meet Global Police Use of Force Standards, Laughland and Lartey for The Guardian, June 18th, 2015

The enemy is the state: how the US justice system started a Civil War, Sergio De La Pava for The Guardian, June 5th, 2015

The U.S. government could count those killed by police, but it chooses not to, The Guardian, June 3rd, 2015

Exploring what it means when police refuse to provide medical attention to their victims, Daily Kos, June 2nd, 2015

When Violence  and Lawlessness are Acceptable, Washington Post (op-ed), May 4th, 2015

When can police use lethal force against a fleeing suspect? PBS Newshour, April 8th, 2015

What We Lose When Police Blame Victims, by Julia Craven and Nick King for the Huffington Post

How cops can help citizens better understand police use of force, Police One, September 3rd, 2015

When should police use deadly force? PBS NewsHour, August 22nd, 2014

Emerging Use of Force Issues: Balancing Public and Officer Safety, report from the International Association of Chiefs of Police (COPS), March 2012

Cop charged with the murder of Laquan McDonald walks out of jail thanks to police fundraising, Jezebel, December 1st, 2015

There is no war on cops: Police threats against Tarantino are unacceptable, Salon, November 12th, 2015

NYPD Union President: Non-Cops “Are Not Qualified” to Judge the Actions of Police, Gawker, September 15th, 2015 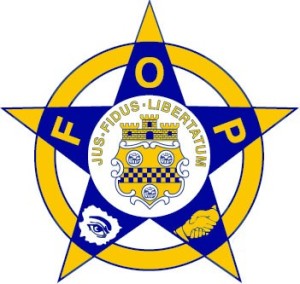 The Increasing Isolation of America’s Police, The Washington Post, May 11th, 2015

It’s Your Right to Film the Police!

Drones and Lethal Robotics: The Future of the Police War on Black Lives, TruthOut, December 23rd, 2015

How to Predict Bad Cops in Chicago, FiveThirtyEight, December 15th, 2015

Eric Garner and Tamir Rice among those missing from FBI record of police killings, October 15th, 2015

One more reason the PIC is awful: the distance it puts between people, The Grist, October 22nd, 2015

In the California Institute for Women, women are dropping like flies, Women in and Beyond the Global, August 2nd, 2015

On the Draft: How Prisoners Suffer Before and After Prison Transfers – TruthOut, July 14th, 2015

We should demand prison-free products as adamantly as cage-free eggs, The Guardian, October 7th, 2015

The Latest Evidence of How Private Prisons are Exploiting Inmates for Profit, Gabrielle Canon for Mother Jones, June 17th, 2015

Getting the Money Out of Prison Reform, Dan Berger for Truthout, May 28th, 2015

Pay to Stay – by Dara Lind for Vox.com, May 26th, 2015; discusses phenomenon of jails and prisons charging inmates for the cost of incarceration.  Related reports available from the Brennan Center for Justice as part of their Criminal Justice Debt project.

How for-profit prisons have become the biggest lobby no one is talking about, Michael Cohen, the Washington Post, April 28th, 2015

The Prison Industry in the United States: Big Business, or a New Form of Slavery? Centre for Research on Globalization, March 31st, 2014

Maximum-security prisoners in Utah are on a hunger strike over prison conditions, Fusion, August 5th, 2015

Can DIY Flipbooks Become the YouTube of Prison? Narratively, not dated

John Oliver blasts our $80 billion prison and parole system that is setting ex-cons up to fail, Raw Story, November 9th, 2015

We Talked to One of the 46 Inmates Barack Obama Released from Prison, Vice.com, July 21st, 2015

A Play That Confronts the Horror of Solitary Confinement, The New Yorker, October 19th, 2015

The Injustice of the Plea Bargain System, The Wall Street Journal, December 3rd, 2015

Should Prison Sentences Be Based on Crimes That Haven’t Been Committed Yet? FiveThirtyEight blog, August 4th, 2015